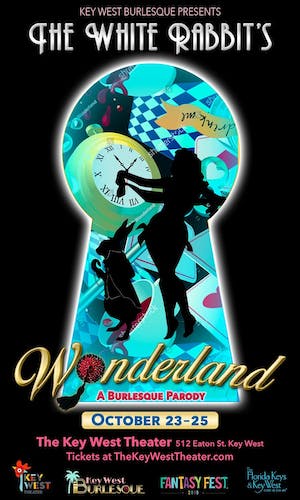 Take a trip down the rabbit hole into a world of wonder and whimsy! A world where the MarchHare dances with a bare derrière and tea parties are way more tasty when the Mad Hatter is only wearing pasties. The White Rabbit’s Wonderland follows the famed fluffy white bunny on his journey around the risqué world of wonderland as he attempts to be on time for some very important dates with a cast of creatures who grow curiouser and curiouser— and sexier and sexier. All of your favorite characters from this epic tale are brought to life by a bodacious bevy of burlesque beauties including Tatah DuJour, Aurora Natix, and many more. 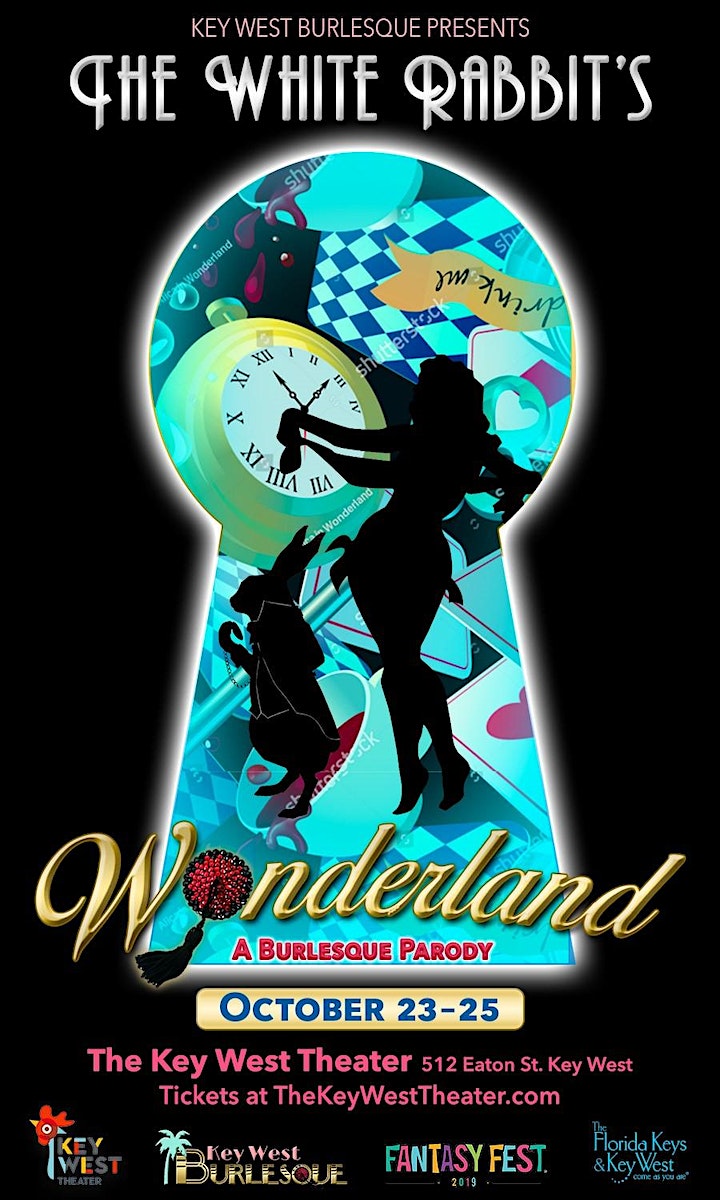 Key West Burlesque is back and set to bump and grind across the main stage at the Key West Theater with its thirteenth season of shows! Fall deep down the rabbit Hole and and brace yourself for more as Key West Burlesque performers Tatah DuJour, Cheeky Derrière, and Moana Amour tantalize and twirl along side guest performers from far and wide including Shelly Watson, Auroura Natrix, and many more in an epic season of shows.

If you’re new to burlesque, expect to see much more than a variety show with a series of bare-it-all strip teases. This troupe is unlike any other in the country, offering full theatrical productions and parodies of well-known material including upcoming wildly-creative interpretations of “The Wizard of Oz,” “Star Wars,” and “The Nutcracker,” with bedazzling costuming, sets, and choreography and a full scope of entertainers that command your attention with or without a birthday suit.

“Our shows are sparkly, glittery, naughty, funny, dance-filled comedy and action like no other show in town,” says creator and director Christa Hunt, who performs as the burlesque queen of the Conch Republic Tatah Dujour. “Each of our productions and the acts and numbers really vary from show to show. You will see magicians, aerialists, pole dancers, roller skating ballet dancers, modern dancers, live vocalists, drag kings and queens, and maybe even a rat or two.”

Founded in 2006 to showcase the classic art form of burlesque, Key West Burlesque’s first show rolled out as “The Red Rooster Revue,” a Waterfront Playhouse performance featuring traditional variety acts by a handful of performers with a live band. Though many islanders had never heard of or seen a burlesque show before, it was met with rave reviews throughout the community. The troupe went on to perform off-Duval in the back room of photo studio Senses at Play as well as at different businesses and events throughout the community. Kelly’s Caribbean restaurant later became their main stage, with scripted theatrical and festival-style shows featuring a cast of twenty to thirty local and international performers, and has since grown to offer productions with full plots and story-lines and large group choreographed numbers that intrigue and delight.

“Shows like the Space Show and Kong Fu became synonymous with Key West Burlesque,” says Hunt. “We also did festival-style productions that brought in some of the best burlesque performers in the country and smaller, fun shows like Dirtie Birdie Burlesque at the Green Parrot.”

Even if you’ve seen them before, you don’t want to miss out on what promises to be a season of continuous reinvention and sensual, comedic entertainment like nothing else on the island. If you haven’t seen them yet, what are you waiting for?