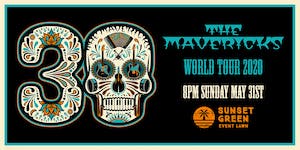 The Mavericks at The Sunset Green Event Lawn

We regret to inform you that at this time we will be canceling The Mavericks at Sunset Green Event Lawn on May 31st. We appreciate your patience during this time and look forward to bringing them back to Key West in the future.

All ticket holders have been notified directly. You have the option to either receive a refund or 120% voucher of your full ticket price towards a future Rams Head production at the Key West Theater or Key West Amphitheater. Your support of our efforts in bringing live music to Key West is greatly appreciated! #saveourstages

To receive a refund or voucher, please fill out this form by May 25, 2020. Our operations and box office are still currently suspended, so refund processing is taking longer than normal.

The Mavericks – masters of country-Latin rock’n’roll, born in the rich cultural mix of Miami then tempered in Nashville’s country hothouse – rode high in the country and rock charts of the 1990s with culture-crossing hits like ‘What A Crying Shame’ and ‘All You Ever Do Is Bring Me Down’. Then they conquered Europe with the titanic feel-good party classic ‘Dance The Night Away’, a 400,000-seller in the UK. Yet nothing lasts forever, and in 2004 The Mavericks went on hiatus while frontman Raul Malo explored new musical avenues.

But since a reunion in 2012, this most singular of bands has re-established itself as one of the most exciting and joyfully entertaining acts on touring and festival circuit across the planet. It’s a reputation based on their irrepressible mix of country, Tex-Mex, rockabilly and Latino sounds plus a riotously entertaining, world-renowned live show. A Mavericks gig is a guaranteed party night encompassing everything from the essential ‘Dance The Night Away’ to the infectious Tejano-ska hybrid of ‘Back In Your Arms Again’ – and, on occasion, even wild cards like a Mavericks take on The Beatles ‘Back In The USSR’.

The Mavericks are true American originals, heirs to the great songwriting traditions of Cuba and Miami, of Nashville and San Antonio and Memphis. Now, on their 30th anniversary as a band, they’re back to remind the world why they’re so good.

“Being away from the band felt like being in a kung fu movie where you go into the mountains on a mystical path to gain special wisdom,” laughs singer, guitarist, key songwriter and founder Mavericks member Raul Malo. “We needed that time away, and a big dose of humility too. It was good for us. That humility and that understanding of each other is what informs the band now. I think it makes us by far the best incarnation of this band yet.”

Raul and drummer Paul Deakin were there at the beginning, in Miami, Florida, where Raul was born and Paul moved aged 8 years old. The melting pot of this great city where Cuban, Caribbean, Latino and rock’n’roll cultures all clash gave The Mavericks their musical DNA. In the streets Raul would hear marching band music and salsa, and at home the magnificence of his mom’s opera records.

“There was a blind guy who sat outside the grocery store playing accordion music for nickels and quarters,” he recalls. “It was some of the most beautiful music I’d ever heard. I loved the drama of it. Later I realized he was playing all the Italian arias that my mom was playing at home…”

Rock’n’roll came to him through Don Kirshner’s Rock Concert or The Midnight Special on TV. But the record that really changed his life was Elvis Presley’s operatic epic of love and longing ‘It’s Now or Never’. “That connected to every kind of music I liked from classical to The Beatles,” he says. “I’ve spent my life emulating that record.”

“And that’s been one of the keys of our longevity,” adds Paul, who took the University of Miami’s famous jazz course before co-founding The Mavericks with Raul and friends. “Everything Raul has listened to goes into the music.” They started out aiming to be a country band, mixing Hank Williams with Johnny Cash or Patsy Cline. But as time went by other influences came in from Raul’s first-generation Cuban-American stylings to Sinatra. And when they played live it wasn’t to country audiences but to the punk and alternative crowds with acts like Marilyn Manson. Anything went.

“We found that our recipe for success was the same thing that sustained us musically: mix it up,” says Paul. “Try things. And we found that nobody sounded like us.” There was something special in his musical partner too. “Some people say Raul’s become the voice of a generation,” says Paul. “I’d agree with that.”

The Mavericks’ rise in the 90s was meteoric. Within a year of forming in 1989 they had signed to MCA Nashville and in 1992 they released their major label debut From Hell To Paradise. There were hits on the radio and in the Billboard charts and, from 1994 to 1996, a string of Country Music Awards. Album number three What A Crying Shame went US Platinum in 1994 and the following year they won a Grammy for their single ‘Here Comes The Rain’. And if the USA cooled a little on The Mavericks by the time of their fifth album Trampoline, 1998’s departure in style for the band, the rest of the world opened up to the classic ‘Dance The Night Away’ – a bona fide worldwide smash which remains a party standard to this day.