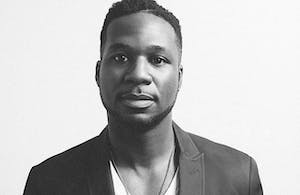 When Robert Randolph talks about his latest album, Lickety Split, a few words come up over and over—"joy," "freedom," "energy." Which is no surprise, really, because those are the same things that immediately spring into a listener's mind when these twelve tracks from the virtuoso pedal steel guitarist and his longtime accompanists, the Family Band, explode out of the speakers.

"My thing is really upbeat, uptempo, with great guitar riffs," says Randolph, summarizing his musical ambitions, "but also catchy choruses and lyrics that someday will make this music into classic tunes."

"Robert Randolph is an American Original," says Don Was, President of Randolph's label, Blue Note Records. "He has mastered what is, arguably, the most complex instrument in the world and developed a unique voice that is equal parts street-¬‐corner church and Bonnaroo. This album finally captures the energy and excitement of his legendary live performances."

But for Randolph, the road to Lickety Split—his first studio recording in three years—wasn't an easy path. Though his distinctive mix of rock, funk, and rhythm & blues continued to earn a rapturous response from a fervent, international audience, he felt that he had lost some of the enthusiasm and intensity that had driven him to make music in the first place. "We just weren't being creative musically," he says. "Being on the road 280 days a year, you wind up playing too much and it isn't fun anymore. Soon, you stop being that concerned about how good you can be, how important it is to create and write. You kind of lose sight of that, of being focused on your craft and spending time with your instrument. I've become more in love with my guitar now, and staying relaxed and practicing and trying to create different sounds."

Robert Randolph & The Family Band first gained national attention with the release of the album Live at the Wetlands in 2002. The band followed with three studio recordings over the next eight years—Unclassified, Colorblind, and We Walk This Road—which, together with tireless touring and unforgettable performances at such festivals as Bonnaroo, Austin City Limits, and the New Orleans Jazz and Heritage Festival, won them an expanding and passionate fan base. Randolph's unprecedented prowess on his instrument garnered him a spot on Rolling Stone's "100 Greatest Guitarists of All Time" list, and also attracted the attention of such giants as Eric Clapton and Carlos Santana, who have collaborated with him on stage and in the studio.

"What I've learned from being around those guys—and you never really notice it until the moment is away from you—is that it's really important to them that someone keeps original music going, that you're not just trying to be like everybody else," he says. "Eric really wants to know what's going on now, he's always going 'Show me that lick again!'—they're like little kids, and that's really the great part about it. It makes me think that I need to keep getting better, to stay excited and keep trying to be innovative and keep growing."

Most recently, Randolph has attempted to amplify the tradition from which he came by executive producing the Robert Randolph Presents the Slide Brothers album, a recording which features some of the older "sacred steel" players from the House of God church who inspired him to pick up an instrument. "This is part of my whole story, which a lot of people don't understand," he says. "In our church organization, playing lap steel in church has been going on since the 1920s. These guys were my mentors, my Muddy Waters and B.B. Kings. Thinking that I started this style is like saying Stevie Ray Vaughan was the first guy to play the blues. I wanted to do this record so that everybody could understand the story and start connecting the dots."

Hollis Brown’s latest single “Run Right To You” was released on 7” vinyl in October 2016 on Velvet Elk/One Little Indian records. Their song “Steady Ground” is a featured exclusive on Amazon’s playlist Amazon Acoustics. The band’s vinyl EP, Cluster of Pearls (Alive Naturalsound Records), was chosen as one of the 300 select releases throughout the world for Record Store Day 2016. Pressed on Starburst Vinyl, the record is limited to 800 copies and features four previously unreleased tracks and two songs released on vinyl for the first time. It was released digitally on iTunes in August 2016. Cluster of Pearls follows up the 2015 release of Hollis Brown’s third album 3 Shots (Jullian Records/RED), featuring the Bo Diddley collaboration “Rain Dance,” and the duet “Highway 1” with acclaimed alt-country songstress Nikki Lane.

The independent act has achieved a significant amount of success since their formation in 2009. They released their debut album Ride On The Train on Alive Naturalsound in 2013 (produced by Adam Landry), garnering song and video premieres from Rolling Stone, Paste, and American Songwriter, along with music placements in the worldwide trailer for the Michael Keaton film “The Founder,” the Willem Dafoe/Matt Dillon film “Bad Country,” Direct TV’s “Kingdom”; Showtime’s “Shameless,” MTV’s “Real World,” and an online ad campaign for Abercrombie & Fitch.

Following a Lou Reed tribute concert in NYC, Alive Naturalsound asked the band to record a tribute to the Velvet Underground’s classic album Loaded, as a limited-edition vinyl release for Record Store Day 2014. Hollis Brown Gets Loaded took on a life of its own, with airplay on influential radio stations, resulting in a full CD & digital release.

The band has toured extensively in America and Europe, headlining and supporting such bands as The Counting Crows, Citizen Cope, The Zombies, Jackie Greene, Heartless Bastards, Rich Robinson of Black Crowes, and Jesse Malin, and building an impressive fan base on both continents.

Mascot Label Group has announced the signing of Hollis Brown to a global recording agreement with Cool Green Records. Their next album will be released on June 7, 2019.