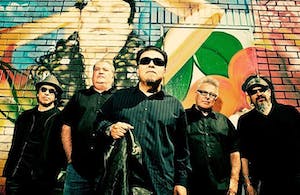 More than three decades have passed since Los Lobos released their debut album, Just Another Band from East L.A. Since then they’ve repeatedly disproven that title—Los Lobos isn’t “just another” anything, but rather a band that has consistently evolved artistically while never losing sight of their humble roots.

While they draw equally from rock, Tex-Mex, country, folk, R&B, blues, and traditional Spanish and Mexican music, their music never sounds forced or self-conscious. Instead, all of their influences become one graceful, gritty sound. The triple Grammy-winning group have become living legends continuing to find ways to redefine and expand their sound, without ever straying from the musical traditions that form the heart and soul of the band.