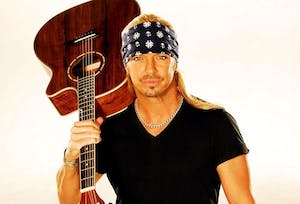 As front man for the legendary rock band Poison, Bret Michaels has sold 25 million records and scored an amazing 15 chartbusting Top 40 singles including "Talk Dirty To Me," "Something To Believe In," "Nothing But A Good Time" and the timeless #1 smash "Every Rose Has Its Thorn."

Bret Michaels is, if nothing else, a true survivor. He has survived a lifelong battle as an insulin dependent diabetic, a well publicized near fatal car crash in 1994 and the countless musical trends and fads of the last two decades. "As soon as I ever start to just go through the motions I'll quit," confessed the singer, songwriter, producer, director and actor in a recent interview. But there's little chance he'll even slow down let alone quit anytime soon. In fact, after more than 25 years in the business this award winning, multi platinum superstar's career continues to move at warp speed.